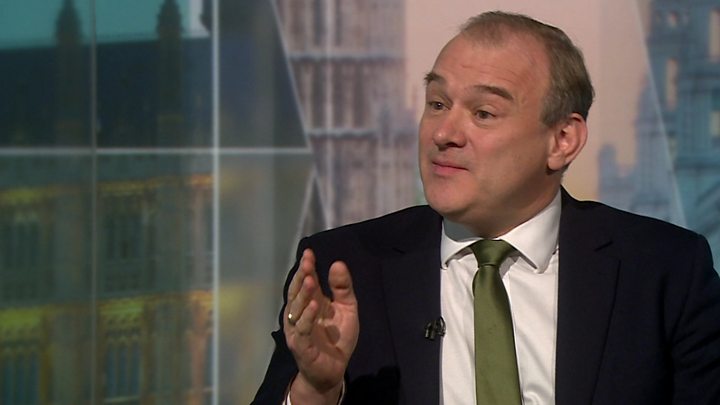 The Lib Dems’ deputy leader says the party can stop Boris Johnson from winning the general election “and through that we can stop Brexit”.

Sir Ed Davey told the BBC the most likely outcome on 12 December was a “minority Tory government”.

He suggested the Lib Dems would support them, along with other parties, if they agreed to another EU referendum.

The party launched its election manifesto earlier with a pledge to stop Brexit which they say would save £50bn.

If the party wins the general election outright, it says it would revoke Article 50, halting Brexit and keeping the UK in the European Union.

If it does not win, it will continue campaigning for another EU referendum, or “People’s Vote”.

Sir Ed told the BBC’s Andrew Neil Show the party wants to stop the Conservatives getting a majority at the election and then use whatever leverage they have to push for another referendum.

“The most likely result I think, looking at the figures, is probably a minority Tory government,” said Sir Ed.

He added: “We can stop Boris Johnson getting a majority and through that we can stop Brexit.”

Sources inside the party concede now that after the withdrawal of the Brexit Party in Conservative seats, what might have been a wildly unpredictable four-way race, has moved to a scrappy national two-way – with the SNP separately dominant in Scotland, and the third smaller UK-wide party eagerly trying to nibble at the margins to get in.

With Labour yet to make any big breakthrough in the campaign, the Lib Dems claim they are the ones who can nab seats from the Conservatives.

So Lib Dem votes in marginal seats are the ones that could prevent Johnson from a clear run at five years in office.

The party’s private hopes a few weeks ago of a massive increase in the number of seats has slipped a lot.