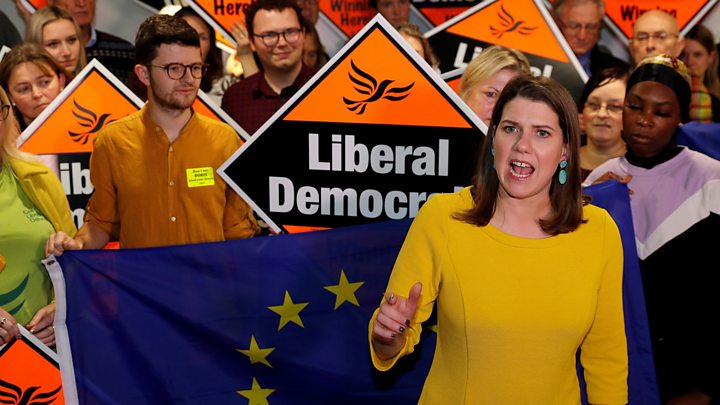 Media captionLib Dem leader Jo Swinson: “This is a fight for the soul of our country”

“Are we generous or selfish, do we reach out or pull up the drawbridge?” she asked supporters at a rally.

She insisted that the party’s plans to stop Brexit are popular and that only the Liberal Democrats can secure a second referendum.

Ms Swinson denied that the party’s plan to revoke Article 50 had been unpopular, citing a petition calling for revocation that was signed by six million people.

She said the Brexit Party’s decision not to contest Conservative-held seats had changed the calculation, making the election harder for her party, so it was now focused on stopping a Brexit-supporting majority in Parliament, rather than revoking it altogether.

“Liberal Democrat votes will not put Boris Johnson or Jeremy Corbyn in government,” Ms Swinson said, but added that her party would work with others to stop Brexit.

She said each new Liberal Democrat MP would push for a vote for a second referendum.

Ms Swinson again accepted that the party had got things wrong when it was in coalition with the Conservatives, but said a Labour majority government would be bad for the economy, “unleashing austerity”.

She said she was confident about the election and party activists will be making the most of the final two days of campaigning.

Ms Swinson also attacked Mr Johnson for what she called his “dog-whistle comments”, which had “let his mask slip,” and said he gave voters “lie after lie after lie”.

He also denied that the party has changed its plans.

He quoted from his party’s manifesto, saying if the Liberal Democrats did not form a government they would “continue to campaign for a people’s vote [on Brexit]. So we’ve been saying that from day one.”

The party has previously been criticised for campaign literature which depicted Ms Swinson as a candidate for prime minister. It is generally thought that only Labour and the Conse