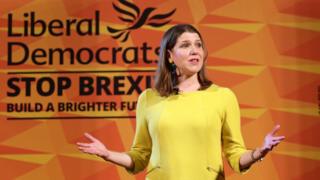 The Liberal Democrats plan to scrap business rates to help small firms and will provide greater support for entrepreneurs, if the party wins the general election on Thursday.

Nearly a million businesses in the UK have closed in the past three years, analysis from the Lib Dems suggests.

The party says Brexit uncertainty has added to the high street’s demise.

Labour says it will base a network of small business advisers in Post Office branches if it wins the election.

Meanwhile, the Conservatives have said they will reduce business rates for smaller firms and give them a larger discount on National Insurance payments.

Lib Dem leader Jo Swinson is due to visit Hertfordshire on Saturday – Small Business Saturday – to discuss her policies with the owners of small businesses in a bid to convince them to back her party, which is in favour of revoking Article 50 and stopping Brexit.

The Confederation of British Industry (CBI) has previously warned the government of the impact a no-deal Brexit would have on the UK and European Union, saying that leaving with a deal is essential to protect the economy and jobs.

Sam Gyimah, Lib Dem shadow secretary for business, energy and industrial strategy, told BBC Radio 4’s Today programme on Saturday that it was “no coincidence” that in a period of such uncertainty, businesses had to close their doors.

Mr Gyimah said: “We have a situation where the Conservatives and the Labour Party are going to throw the economic cards up in the air a