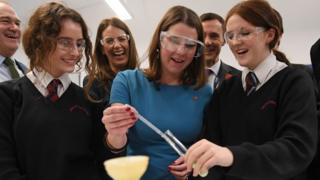 The Lib Dems have promised to recruit 20,000 more teachers in England and spend an extra £10bn a year on schools if they are elected to government.

The party, which will launch its manifesto on Wednesday, says it will reverse school cuts with an “emergency cash injection” of £4.6bn next year.

The money will boost teacher numbers by 20,000 over five years, the Lib Dems added.

The anti-Brexit party says £10bn will be taken from what they claim will be a £50bn “Remain bonus” from staying in the EU to increase school funding.

Leader Jo Swinson also flagged up another likely manifesto policy in an interview with ITV on Tuesday, saying the party had plans for a frequent flyer tax.

“We’ve got plans for a frequent flyer lever that would certainly be discouraging many flights but would be raising revenue from that, so it wouldn’t be an outright ban or limit but would be an effective measure to change behaviour.”

To attract and retain teachers, the Liberal Democrats say they will increase starting salaries to £30,000 and they will guarantee a pay rise of at least 3% a year over five years.

The party would also spend £7bn on improving school buildings over the next five years.

Lib Dem leader Jo Swinson said: “This is an investment in our children’s future. Our schools should be world class, helping every child make the most of the challenges ahead.

“But instead, they are trailing behind. The Conservatives have cut school funding to the bone and children have paid the price, especially those with the most complex needs.

“It is disgraceful that some schools feel they have no choice but to ask parents to chip in for supplies, and are closing early on Friday to balance the books.”

She said her party will “build a brighter future for every child”.

After a decade of tightening budgets, the political parties in England are competing to offer more cash to England’s schools. Since 2010, the spending per pupil in England has fallen by 8% in real terms, despite being at its highest ever level in cash terms.

These plans by the Lib Dems go further than the commitment already made by the Conservatives.