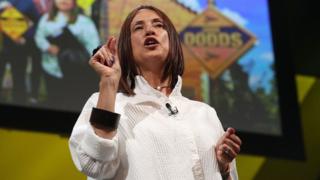 Image copyright Jonathan Brady/PA Wire Image caption We should have stood up to cuts affecting the poorest of the poor, says Jane Dodds

The Welsh Liberal Democrat leader has said her party would keep the Tories in power “over my dead body”.

Jane Dodds said she was “deeply ashamed” at the Lib Dems’ role in the coalition government of 2010 to 2015.

She told a BBC Radio Wales election phone-in the party should have “stood up to the cuts that were happening to the poorest of the poor”.

Ms Dodds said her time as a social worker meant she had seen the effects of poverty on families.

Lib Dem leader Jo Swinson has apologised for backing cuts while serving as a junior minister in the coalition, but Ms Dodds was not an MP at the time.

“What we did in the coalition government was not acceptable when it came to benefit cuts,” Ms Dodds said.

“The Conservatives have continued with that austerity agenda, introducing things like universal credit with a five-week waiting limit which makes sure that people sadly are pushed to food banks.

“I will fight every step of the way to make sure that we have a better benefits system which picks up those who fall through the safety net.”

Ms Dodds also denied people who wanted to stop Brexit should vote Labour rather than Liberal Democrat in next week’s general election.

The Lib Dems have pledged to cancel Brexit without another vote if they win, but Ms Dodds admitted that was unlikely to happen, with cross-pa