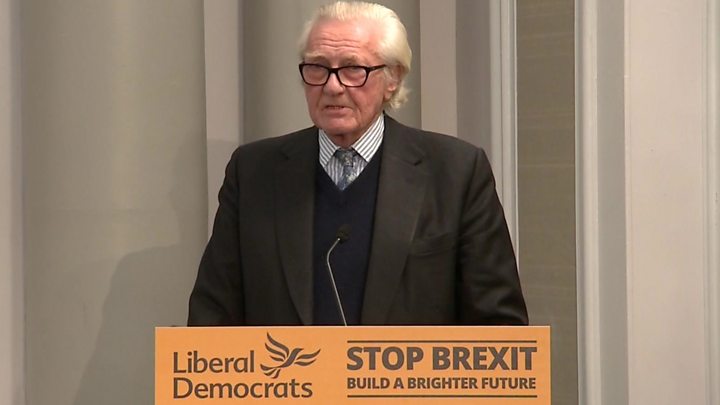 Media captionLord Heseltine: “There is no certain end” to Brexit debate

Tory peer Lord Heseltine has warned of “uncertainty” for the UK if the Tories win the election and pursue Brexit.

The former deputy PM said it was “technically true” Boris Johnson could get his plan agreed in Parliament by the end of 2019 if he wins a majority.

But he told a Liberal Democrat event it would only “set [Mr Johnson] on the journey” for Brexit before “the real punch-up begins”.

Lord Heseltine has pledged to back the Lib Dems in the 12 December poll.

He told the event he was still a “proud Conservative”, but said he would “vote for British self-interest and those people who are standing in its name”.

In a speech drawing on his decades in public life, Lord Heseltine set out how getting Mr Johnson’s Brexit deal signed off by MPs “does not take us out of Europe”, but just into the next stage of talks with the EU over a trade deal.

He added: “It is sort of like a boxer about to enter the ring. [Mr Johnson] will take us to a position where the real debate, the real punch-up begins, and there is no certain end to that.

“But there is one certain consequence – that the uncertainty that has brought large parts of the investment in this country to a halt will be perpetuated all through next year.”

Lord Heseltine said no-one could predict how trade talks between the UK and the EU would go, except that they would “take an unpredictable period of time” and that “no-one has the first idea what will be on offer at the end of that process”.

But if it the result was not acceptable to the British people, “then in order to fulfil the manifesto commitment of Mr Johnson, we have to leave with no-deal, the worst of all conceivable options, still on the table as an unpredictable period in an unpredictable set of circumstances”.

Lord Heseltine added: “So next year is one of uncertainty.”

Lib Dem candidate Sam Gyimah – who left the Tory Party over its stance on Brexit – said the choice in this election was between “a hard Brexit government or a hard left government”.

Instead, he called for others to follow Lord Heseltine’s lead to vote for “the biggest party of Remain”, saying the Lib Dems “offer a real choice to choose values of inclusivity”.