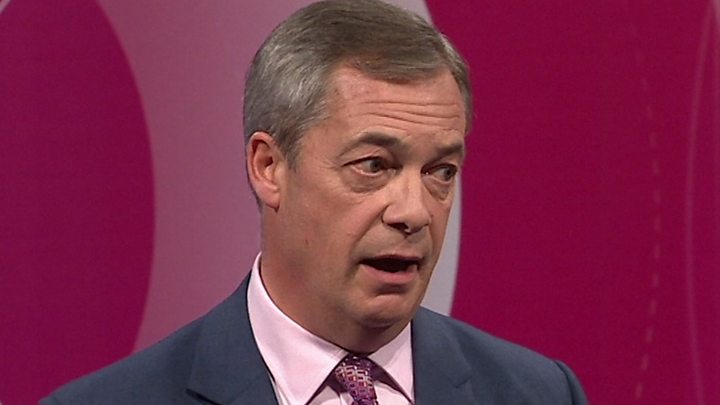 Media captionNigel Farage: “We need to bring settlement down to [a] sensible post-war number”

Net migration should be capped at 50,000 a year, says Nigel Farage.

The Brexit Party leader told a BBC Question Time Leaders Special that the figure should return to a “sensible post-war number”.

Net migration is the difference between the number of people who arrive in a country and those who leave – and in the year ending March 2019, the figure for the UK was 226,000.

The special BBC One programme – part of a series with party leaders ahead of the general election – will air at 22:45 GMT.

Mr Farage first mentioned the 50,000 figure when he was leader of UKIP.

In its 2015 manifesto, the party said it would “limit highly-skilled work visas to 50,000 per annum, including those from the EU, and apply a moratorium to unskilled and low-skilled labour over the course of the next Parliament”.

Asked by the BBC’s Fiona Bruce whether his new party stood by the pledge, he told audience members in Peterborough: “I do not think that our quality of life in this country improves as our population heads inexorably towards 70 million, which is where it’s going to be by the end of the 2020s.

“For 60 years after World War Two, we had annual net migration running at 30,000 to 50,000 a year. We had, actually, of all the European countries, the most successful integration. Things worked here well.

“For the last 10 years, it’s been running at between a quarter of a million and a third of a million every year. We need to bring settlement down to that kind of sensible post-war number.”

Mr Farage said he would allow for a “work permit system” to let people come to fill jobs – such as vacancies in the NHS.

The Brexit Party leader was then asked by the audience for his response to claims he was racist.

Mr Farage said the accusation had been levelled at him in the past, adding: “You know why? Because nobody else dared talk about [immigration].

“The issue had been brushed under the carpet,