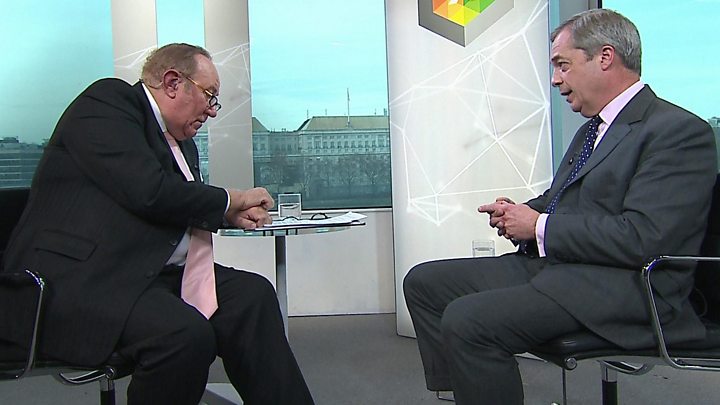 Nigel Farage has defended his “difficult” decision not to contest Tory-held seats, insisting he was putting “country before party”.

The Brexit Party leader told the BBC’s Andrew Neil that his party had stopped the “Lib Dem surge” and were “tearing chunks out of the Labour vote”.

He said his party was the challenger in Labour-Leave areas in next week’s poll.

It comes as three Brexit Party MEPs quit to support the Tories, saying the party will split the pro-Brexit vote.

Mr Farage announced in November that his party would not contest the 317 Westminster seats the Conservatives won in 2017, in order to help Leave-supporting candidates win.

Some have been critical of this decision, including MEP John Longworth, who lost the Brexit Party whip in the European Parliament on Wednesday for not support his leader’s strategy. He is now backing the Conservatives.

During the 30-minute interview with Andrew Neil, Mr Farage was asked about his election strategy, Islamophobic remarks made by two of his candidates and whether the NHS should be “on the table” in any post-Brexit trade talks with the US.

The Brexit Party leader denied being marginalised at the general election.

Mr Farage said: “I don’t think if you came with me and visited some of the Labour heartlands in the north you would think that and I also think that what we’ve done is have a very dramatic effect on this election.

“I think, number one, the decision, difficult decision, I took in 317 seats to stand down.

Mr Farage claimed the Brexit Party had prevented a “surge” from the pro-EU Lib Dems and had, therefore, blocked a second EU referendum.

“What we are actually doing now is tearing chunks out of the Labour vote,”