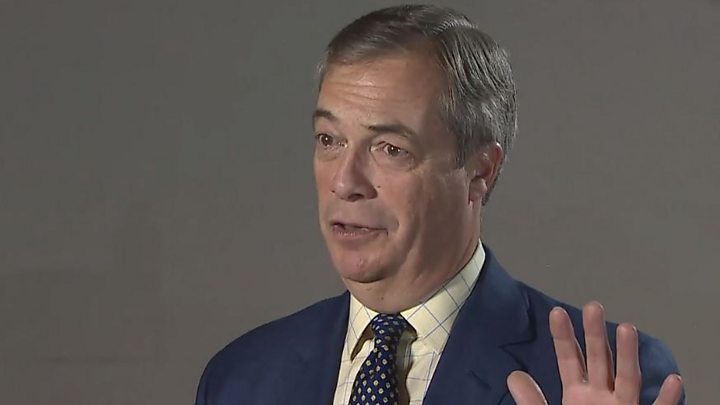 Brexit Party leader Nigel Farage has urged people who want the UK to leave the EU to vote tactically in the general election.

He urged Labour and Tory voters to back his party if they thought its candidate would fight harder for Brexit.

Speaking in Buckley, Flintshire, Mr Farage said the Brexit Party was a danger to Labour’s dominance in Wales.

He denied that Prime Minister Boris Johnson’s pro-Brexit stance had left his party struggling for relevance.

The Brexit Party is standing in 275 of the 650 constituencies after a decision not to contest the seats won by the Conservatives in 2017.

“We are taking on the Labour Party, that’s our main challenge,” Mr Farage told BBC Wales during a visit to north Wales for a Brexit Party rally.

“We’re taking on the remainer parties and we’re saying to people, Labour or Conservative, if you think the candidate in your seat that can actually go to Westminster and fight for Leave is the Brexit Party, then tactically that’s who you have to vote for.”

Asked how many seats in Wales his party could realistically win Mr Farage replied: “We’re a new party – don’t ask me that.”

The Brexit Party is fighting 32 of the 40 Welsh constituencies. In May, it topped the poll in Wales for the European Parliament elections, taking two of the four Welsh seats.

Its general election offering to voters includes a pledge to make MPs who switch parties subject to recall petitions.

However, the four Brexit Party members of the Welsh Assembly were originally elected for UKIP, the party Mr Farage previously led.

Asked if this made the election pledge hypocritical, Mr Farage said it was an “unusual circumstance”, claiming the quartet had been made “homeless” by the collapse of UKIP.

Earlier, Brexit Party MEP Nathan Gill urged activists to end what he called a “Labour-Plaid Cymru alliance” which had “dragged Wales down over 20 years”.

He claimed Labour had “poured money into Cardiff” to the detriment of other parts of Wales.