Media captionWATCH: Jeremy Corbyn is pressed over his handling of anti-Semitism within the Labour Party

Jeremy Corbyn has declined to apologise to the UK Jewish community after the chief rabbi criticised how the party deals with anti-Semitism claims.

In a BBC interview with Andrew Neil, the Labour leader was asked four times whether he would like to apologise.

Mr Corbyn said his government will protect “every community against the abuse they receive”.

Labour has been beset by allegations of anti-Semitism for more than three years, leading to the suspension of a number of high-profile figures such as Ken Livingstone and Chris Williamson, and an unprecedented investigation by the Equality and Human Rights Commission.

In an interview with Andrew Neil on BBC One, Mr Corbyn was asked four times whether he was going to apologise to the British Jewish community following the chief rabbi’s claim that Labour was not doing enough to root out anti-Jewish racism.

Mr Corbyn replied: “What I’ll say is this I am determined that our society is safe for people of all faiths.

“I don’t want anyone to be feeling insecure, in our society and our government will protect every community against the abuse they receive on the streets, on the trains, or in any other form of life.”

Mr Corbyn said racism “is a total poison”, adding: “I want to work with every community, to make sure it’s eliminated. That is what my whole life has been about.” 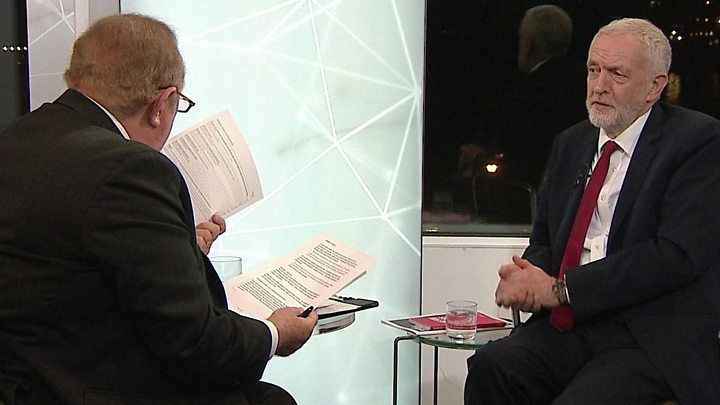 Media captionJeremy Corbyn says restoring Waspi pensions would be be paid for from government reserves and long-term borrowing.

Rabbi Mirvis described Mr Corbyn’s claim that Labour had “investigated every single case” of alleged anti-Semitism as a “mendacious fiction”.

Challenged about the rabbi’s comment, Mr Corbyn said: “No, he’s not right. Because he would have to produce the evidence to say that’s mendacious.”

The Labour leader said he was “looking forward to having a discussion with him because I want to hear why he would say such a thing”.

Mr Corbyn also insisted he had “developed a much stronger process” for dealing with allegations and had sanctioned and removed members who were judged to have made anti-Semitic statements.

He added that anti-Semitism allegations “didn’t rise after I became leader”.

“Anti-Semitism is there in society,