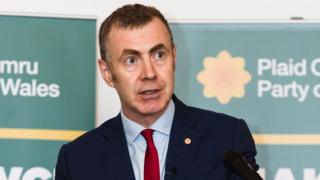 Image copyright Plaid Cymru Image caption Adam Price: “We can be the cradle of another revolution – a green jobs revolution”

Plans include huge investment in rail and bus travel, three tidal lagoons, a barrage and a new offshore wind farm.

Mr Price will say tens of thousands of “green collar” jobs can be created and the “urgent climate emergency” tackled.

The manifesto will also say there should be another EU referendum so voters are given a final say on Brexit.

Mr Price will say the proposals will make Wales self-sustainable in renewable energy by 2030.

“Wales was the cradle of the first industrial revolution, but the sad truth known to all of us who live in Wales is that our country hasn’t reaped the benefits of our own wealth,” he will say at the launch event in the south Wales valleys.

“We know that Wales has enormous potential – we are rich in natural resources and our people are talented and skilled.

“Just as we were the first time, we can be the cradle of another revolution – a green jobs revolution – creating tens of thousands of green collar jobs and seriously tackling the urgent climate emergency we face.”

The green plans include:

To pay for the plans, Plaid Cymru is calling for the UK government to devote an extra 1% of GDP, a measure of the size of