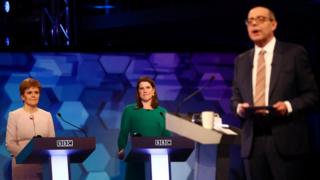 Politicians have shared their plans to tackle security issues in the UK after the terror attack in London Bridge.

Seven senior figures from the major political parties are taking part in a debate on the BBC ahead of December general election.

But the early focus was on the incident in the capital, which saw two people killed and the attacker shot dead.

The politicians all paid tribute to the victims and their families, and praised emergency services for their response.

The debate is also covering topics like Brexit, climate change and trust in politicians.

Mr Sunak said it was the “first duty of every government” to keep the public safe.

He promised the Conservatives would “continue to do that” by investing in police and giving them the powers they need to tackle threats to the UK.

Labour’s Ms Long-Bailey agreed there needed to be more investment in police.

But she said Tory cuts had reduced personnel by 20,000 – the number by which Boris Johnson has pledged to increase forces if he continues as prime minister.

“It is right to recognise the direct impact [of those cuts] and invest more in community policing – the eyes and ears of our communities,” Ms Long-Bailey added.

She then praised police work in Scotland – namely the violence reduction unit in Glasgow, which has been credited with more than halving incidents of knife crime.

The Brexit Party’s Mr Tice added to the calls for more police on the streets of the UK, but said “people must remain vigilant” in light of attacks.

For the Greens Party,