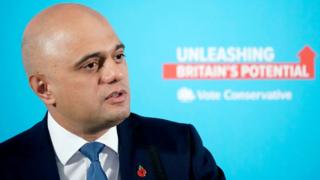 Chancellor of the Exchequer Sajid Javid has said there was not “a single doubt” in his mind that the UK would “have agreed and finalised a very ambitious deep and comprehensive trade deal” with the European Union (EU) before the end of next year.

That’s when a post-Brexit transition period is due to come to an end.

But this is not the case.

What the UK has agreed is the political declaration – a non-binding document setting out the broad direction of travel for negotiations with the EU after Brexit.

That document says both sides want “an ambitious, broad, deep and flexible partnership across trade and economic co-operation”, based on “a balance of rights and obligations”.

But the precise details still have to be negotiated.

And while “Get Brexit Done” may be a good campaign slogan, slogans don’t make trade agreements.

Trade agreements are made by tough decisions, technical negotiations and trade-offs. It’s not the same thing.

Mr Javid said that since Boris Johnson became prime minister the UK had not only negotiated a revised withdrawal agreement with the EU, but had also “negotiated… the outline of a trade agreement”.

In fact, the EU is not allowed by law to conduct any formal negotiations on a trade deal until after the UK has left. And if Brexit does happen on 31 January, the other 27 EU countries would then need to approve a joint negotiating mandate.

That’s a process which could take about six weeks, if things go well. So it is unlikely that formal trade negotiations would begin until about mid-March, leaving very little time to discuss the detail.

Ratifying any agreement before the end of next year would take several months, so the negotiations themselves would need to be completed by the summer.

The government argues that its deal with the EU is different from other deals because the two sides are already fully aligned when it comes to rules and regulations.

That is true – and neither side has an interest in dragging things out. A lot of preparatory work has been done.

The UK has made clear that it wants to diverge from EU rules, which will make it more difficult to get a trade agreement done quickly.

Both sides have talked about a “zero tariff,