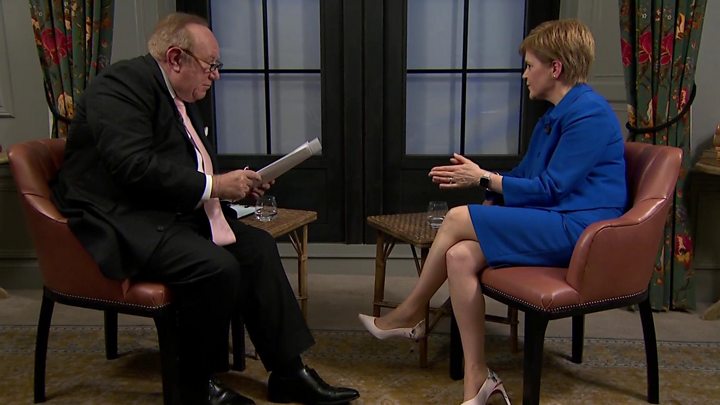 Media captionNicola Sturgeon says the timescale for an independent Scotland joining the EU would be “relatively quick”.

An independent Scotland could rejoin the EU on a “relatively quick” timescale, Nicola Sturgeon has said.

The Scottish first minister and SNP leader wants a new referendum on independence to be held in 2020, and is also opposed to the UK leaving the EU.

She told the BBC that Scotland would be “seeking a way back in” to the EU if Brexit happened.

The Conservatives have claimed that a Labour government backed by SNP votes would lead to two referendums in 2020.

The SNP leader was taking part in a special interview with Andrew Neil as part of the build-up to the snap general election on 12 December.

Other party leaders are also set to be quizzed by Mr Neil, with Labour’s Jeremy Corbyn to follow on Tuesday.

Ms Sturgeon has said her SNP MPs could potentially help to put Mr Corbyn in Downing Street in the event of a hung parliament, but said the Labour leader must first accept the “fundamental principle” that an independence referendum should be “in Scotland’s hands”.

She told Mr Neil that she would always back a new, UK-wide EU referendum but said there was “no guarantee that fixes the problem for Scotland”, as “we could end up with exactly the same result we had in 2016” – with a majority in Scotland backing Remain, while the UK as a whole votes to Leave.

Questioned about how swiftly an independent Scotland could re-enter the EU, Ms Sturgeon said she did not want to set out a “specific timescale”, but said talks she had had previously meant she thought it would be “relatively quick”.

She explained: “We understand the conditions we would require to meet, and the discussions that would require to take place. But if we’re in a position of Scotland being taken out of the European Union then we will be seeking a way back in.”

The SNP currently plan to have Scotland continue to use the pound in the years immediately after independence, before establishing a new currency after a series of stringent economic tests are met.

Challenged on whether Scotland could join the EU while using the currency of a non-member state, Ms Sturgeon said this was possible.

She said: “We would be setting up a central bank,