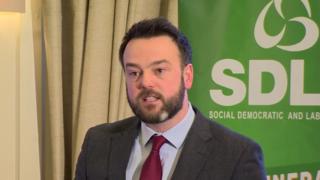 The SDLP leader has made a strong attack on MPs who refuse to take their seats saying “decisions are made by those who show up”.

Launching his party’s manifesto, Colum Eastwood said the general election would be “potentially decisive” on Brexit.

Mr Eastwood is trying to win back Foyle from Sinn Féin, which won the seat for the first time in 2017 by 169 votes.

Without mentioning Sinn Féin by name, he said: “History doesn’t judge those who don’t turn up at defining moments – it casts a far harsher verdict.

“It simply doesn’t mention them because they make no difference.

“You only make a difference by being there. Decisions are made by those who show up.”

Mr Eastwood added: “In the next two months, Westminster will decide if we are forced out of the European Union.

“In the next two months it will decide and direct our future like never before.

“Quite literally there has been no time like the present – and it has never been more important to be present.”

He also paid tribute to the outgoing Independent Unionist Sylvia Hermon saying “she was our Remain voice and she will be badly missed”.

In its manifesto, the SDLP pledges to: