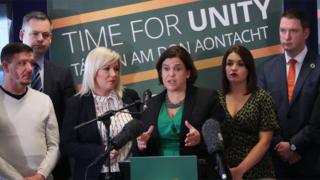 The Sinn Féin president has accused the Democratic Unionist Party (DUP) of using its “crazy” Brexit agenda as a badge of honour at Westminster.

Mary Lou McDonald was speaking at the unveiling of her party’s general election manifesto in Londonderry.

Addressing the manifesto event, Ms McDonald attacked the claim the solution to Brexit would only be found in the House of Commons.

“The farce of a notion that you go into the house of chaos at Westminster… [with] Jacob Rees-Mogg as he reclines on the green benches and snoozes off is fanciful,” she said.

Sinn Féin is the second largest party in Northern Ireland after the DUP and it secured seven MPs at the last general election in 2017.

Its representatives do not take their seats at Westminster due to its policy of abstentionism.

The party’s core belief is that Northern Ireland and the Republic of Ireland should be united as a single independent republic.

In its manifesto, Sinn Féin claims credit for securing special status for Northern Ireland and no hardening of the Irish border.

It also highlights other areas of focus related to the outcome of the Brexit negotiations, including protecting the Good Friday peace agreement and ensuring automatic re-entry to the EU through Irish unity.

The manifesto features polls that the party says show the demand for Irish unity and it calls on the Irish government to prepare for a referendum on unity.

“The voice of the north has been heard loud and clear – not only heard, it has been heeded and acted on,” she said.

What is in the party’s manifesto?

Some of the party’s key manifesto pledges include:

Sinn Féin, the SDLP, and the Green Party have reached a pact in the interest of boosting the anti-Brexit vote in certain constituencies in the election.