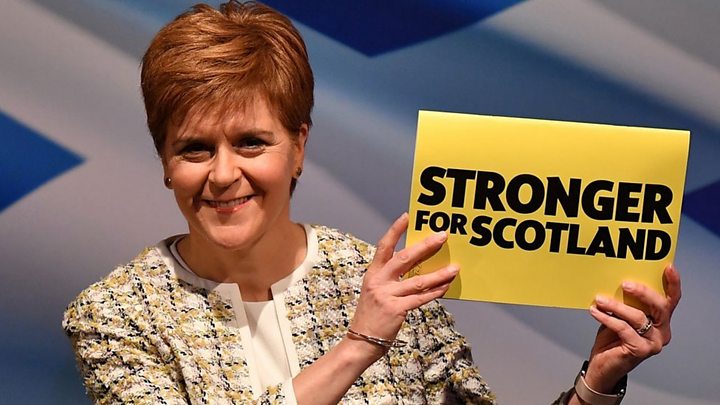 Introducing the SNP’s general election pledges in an independent Scotland could lead to more austerity, according to an economic research group.

The Institute for Fiscal Studies (IFS) said the SNP’s manifesto set out plans to increase spending while also setting out a list of tax-cutting measures.

It said the SNP had not costed these pledges, unlike the other main parties.

The IFS has previously said that the spending pledges of both the Conservatives and Labour ahead of the election were “not credible”, and accused both parties of not being honest with voters.

It said the Liberal Democrats’ manifesto would involve lower levels of borrowing than under Labour or the Conservatives, but would still be seen as “radical” in “most periods”.

The SNP manifesto was unveiled last month by leader Nicola Sturgeon, who said her party was offering Scottish voters a chance to “escape Brexit and put Scotland’s future in Scotland’s hands”.

What does the IFS says about the SNP manifesto?

In his analysis of the SNP’s manifesto, IFS associate director David Phillips said it differed from those of the other three major parties because it was not “a plan of action for five years of governing the UK”.

Writing in the Scotsman newspaper, Mr Phillips argued that the document was instead about “starting the process of leaving the UK in the next year”.

He highlighted the party’s call for the UK government to dramatically increase spending on the NHS in England, which would add hundreds of millions of pounds to the Scottish government budget through the Barnett Formula.

He said spending proposals such as the abolition of the so-called “bedroom tax”, ending the two-child cap on means-tested benefits and other increases to Universal Credit would benefit low-income, working age families.

But he said other proposals aimed at pensioners, such as keeping universal free TV licences for the over-75s and offering “compensation” for the so-called Waspi women, could actually increase inequality.

This is because pensioners are already “less likely to be in poverty than the rest of the population”, he said.