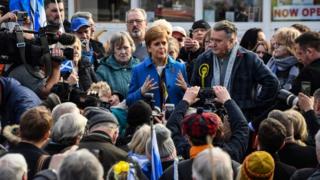 The SNP is to launch its election campaign by promising to bring forward legislation to protect the NHS from privatisation and future trade deals.

The NHS Protection Bill would block any UK government from using the NHS as a “bargaining chip” in trade talks.

If passed it would also give devolved parliaments in Scotland, Wales and Northern Ireland a veto on these deals.

SNP leader and Scottish First Minister Nicola Sturgeon said the NHS should not be for sale “at any price”.

The UK government has insisted the NHS is “not on the table” for trade talks and is not in any way “up for sale”.

The health services has been a key topic in the early days of the election campaign, with Labour also claiming they could be vulnerable to privatisation.

The UK’s political parties are setting out their platforms ahead of the snap general election on December 12.

Nicola Sturgeon has pledged to put opposition to Brexit and backing for a new independence referendum “at the heart” of the SNP’s election bid.

However, she is also set to prioritise health services at her campaign launch event in Edinburgh, with a manifesto commitment to bring forward an NHS Protection Bill at Westminster.

The party said the legislation “would explicitly prevent any future UK government from signing up to any agreement that made the NHS, in any part of the UK, a bargaining chip of any kind in any future trade deals”.

It would also require the “explicit approval” of the Scottish, Welsh and Northern Irish parliaments before any new trade deal could be signed, so they could agree that there was “no negative impact” on the NHS or the price of medications in their countries.

Ms Sturgeon said Prime Minister Boris Johnson had been “very clear about his desire for a post-Brexit trade deal with Donald Trump”, and said this could pose a threat to the health service.

She said: “The NHS in Scotland is run in Scotland, for Scotland and under the SNP it will always be in public hands. Our NHS is not for sale at any price.

“And while the Scottish Parliament has control of health policy, we cannot currently stop Westminster signing away that protection in a trade deal,