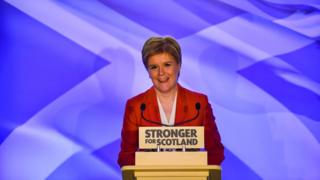 Nicola Sturgeon has claimed Jeremy Corbyn will have little choice but to back a second independence referendum if he wants to be prime minister.

The first minister said the Labour leader would not “walk away” from a deal with the SNP.

Boris Johnson has accused his Labour rival of having already done a deal with Ms Sturgeon to win the keys to Number 10.

But both Labour and the SNP say there is no such agreement in place.

However, Ms Sturgeon said she was confident an agreement on a second independence vote could be done if Labour needed SNP support to form a government if there is a hung parliament after the general election on 12 December.

Speaking at an SNP rally in Dundee, she said: “I do believe that if the parliamentary arithmetic enables this then Jeremy Corbyn is not going to turn his back on an opportunity for a UK Labour government just because he is determined to block the right of the Scottish people to choose their own future.

“It would take a lot of explaining if he were to say, no I am going to walk away from this opportunity, why am I going to do that? because I want to veto Scotland’s right to self determination.

“This is a man who favours self-determination for virtually every other country on the planet, it would be a bit odd if he was to give up his chance at government.”

Scottish Labour have said they will campaign against independence if the issue is put to another referendum but there has been some confusion on Mr Corbyn’s indyref stance.

Speaking in the first TV debate of the election, Mr Corbyn said there would be “no support for a Scottish referendum” on independence in the early years of a Labour government.

Image caption An average audience of 6.7m people watched the leaders lock horns in the first TV debate with the NHS, leadership and the future of Scotland among the issues discussed

It came after Mr Johnson accused him of plotting a “chaotic coalition” with Ms Sturgeon.

Liberal Democrat leader Jo Swinson has previously ruled out giving consent for a second independence referendum and claimed the issue was settled by the result of the 2014 vote.

During a visit to at a farm outside Castle Douglas, in Dumfries and Galloway, on Wednesday Conservative minister Michael Gove said the 2014 independence referendum “would decide Scotland’s place for a lifetime, for a generation”.