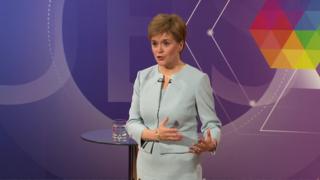 Nicola Sturgeon has said she does not think she would be asking for another Scottish independence referendum now if the UK had not voted for Brexit.

Speaking on the BBC Question Time leaders’ special, the SNP leader said Scotland faced being taken out of the EU against its will.

She said things had “dramatically” changed with the Brexit vote and voters should be able to change their minds.

The four leaders all faced 30 minutes of questions at the event in Sheffield, hosted by Fiona Bruce.

Responding to a question from the audience, Ms Sturgeon said: “If Brexit hadn’t happened, I would still support independence – I’m not going to pretend otherwise.

“But do I think right now we’d be standing here talking about having another independence referendum so imminently? Probably not.

“But circumstances have changed dramatically – in a democracy, when circumstances change, people have to have the right to change their mind, and if they don’t have that right then I don’t believe what we’re living in is a democracy.”

Will the SNP support a Labour government?

Asked about what she would do in the event of another hung Parliament after 12 December, she said she would not work with the Tories but was prepared to deal with Labour if Jeremy Corbyn committed to end austerity and agreed to hold another Scottish independence referendum.

Ms Sturgeon said she didn’t envisage a formal coalition, but could foresee a “less formal” confidence and supply arrangement with the Labour party if he met her conditions.

She reiterated that if Mr Corbyn wanted the support of the SNP he should “respect the right of the people of Scotland to choose their own future”.

Politicians at Westminster do not have “a moral or democratic right” to stop the Scottish people from making that choice. “We have the ability to send that message,” she added.

Earlier in the programme, Mr Corbyn again said that an independence referendum would not be “a priority” in the “early years of a Labour government”.

Pushed to be more specific on what “the early years” meant, he said “the first two years, at least”.

He has previously said he would “certainly not” allow a Scottish independence vote until after the next Holyrood election in 2021.

But Ms Sturgeon – who wants an independence referendum next year –