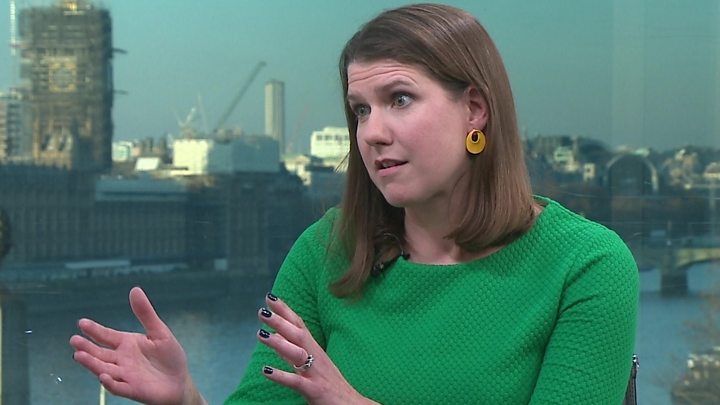 Media captionJo Swinson: “I am sorry that I did that, it was not the right policy, and we should have stopped it.”

Jo Swinson has apologised for voting to cut benefits while serving in government with the Conservatives.

The Liberal Democrat leader told the BBC’s Andrew Neil her party had been wrong to back the so-called bedroom tax in the coalition government and “we should have stopped it”.

Although some cuts were needed when her party came into office in 2010, she suggested austerity had gone too far.

Her party was committed to spend more on welfare and childcare, she added.

During the 30-minute interview, Ms Swinson said she was determined to stop Brexit by whatever means possible, including working with other parties in the event of another hung Parliament to try and get another referendum.

But she conceded the Lib Dems were unlikely to form the next government and be in a position to fulfil their campaign pledge to revoke Article 50 – the legal process for leaving the EU – without a further public vote.

She said she disagreed with her predecessor Sir Vince Cable that the pledge had become an “unhelpful distraction” for the party, which has found itself being squeezed in the opinion polls during the campaign.

Having only been elected leader in July, she insisted she was “absolutely here to stay” whatever the outcome on 12 December.

Ms Swinson was repeatedly challenged on her party’s record in government between 2010 and 2015 and her personal backing for cuts to benefits and Sure Start children’s centres.

She acknowledged she had voted nine times for the bedroom tax, the controversial policy which saw working-age families in council or housing association homes docked housing benefit if they were deemed to have more bedrooms than they needed.

Ms Swinson, who served as a junior business minister in the Lib Dem/Conservative coalition between 2012 and 2015, was asked whether she would like to apologise to 240,000 of the poorest in society who suffered financially as a result and, in some cases, were forced into hardship.

“Yes, I am sorry I did that,” she replied. “It was not the right policy and we should have stopped it…I have previously said – and I am happy to say again – [it] was wrong. I am sorry about that and it is one of the things we did get wrong.”

Asked about other welfare changes she backed at the time but is now committed to reversing, such as a cap on the overall amount of benefits a single household could receive,