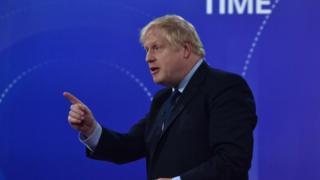 The Conservative Party is set to launch its general election manifesto, promising to bring back the Withdrawal Agreement Bill before Christmas to achieve Brexit by the end of January.

Boris Johnson will unveil the document in the West Midlands on Sunday.

It will include a headline promise to “get Brexit done” alongside plans for a “triple tax lock” and a pledge to raise the National Insurance threshold.

Mr Johnson has vowed to “unleash the potential” of the UK.

Speaking ahead of the launch, the prime minister said: “Our One Nation agenda will unite this great country for years to come.

“It’s time to turn the page from the dither, delay and division of recent years.”

The manifesto pledges a Tory government will bring back the Withdrawal Agreement Bill in Parliament before 25 December – if the party gets a majority.

The aim is for MPs to ratify the prime minister’s Brexit deal before the UK is due to leave the EU on 31 January.

The Withdrawal Agreement Bill passed its second reading in October.

The manifesto will also include a commitment to a “triple tax lock” – a promise that the rates of income tax, national insurance and VAT would not rise under a Conservative government.

The pledge is in addition to Mr Johnson’s previous announcement to raise the National Insurance contributions threshold to £9,500 in 2020 with an ambition to increase the threshold to £12,500.

Among other measures already announced are pledges for more investment in the NHS, schools and tackling crime.

Other key pledges in the manifesto will include:

The party says this will be funded by £78m per year, which it claims is new funding for providing extra parking capacity, or compensation for lost fees.

Labour, in contrast, want to make hospital parking free across the board for everyone.