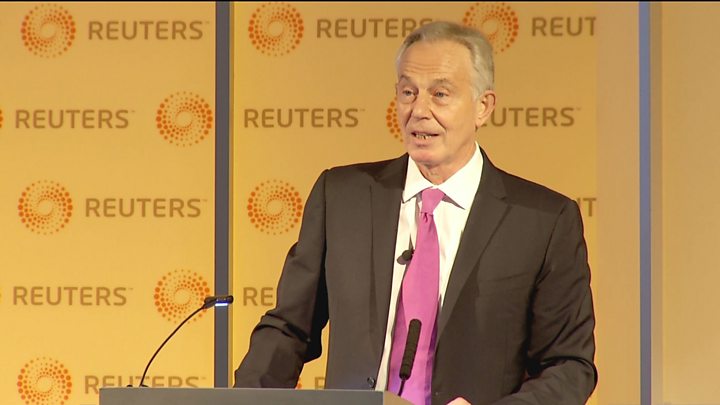 Media captionTony Blair: ‘This election is the weirdest in my lifetime’.

Former Prime Minister Tony Blair has said the UK is a “mess”, with politics “utterly dysfunctional” ahead of the general election.

The ex-Labour leader said a majority government for either his party or the Conservatives would “pose a risk”.

Both main parties, led by Boris Johnson and Jeremy Corbyn, were “peddling two sets of fantasies”, he said.

The election was the “weirdest in my lifetime”, Mr Blair added, but he said he would vote Labour on 12 December.

In their manifesto, the Conservatives say that, if they win a parliamentary majority they will get Brexit” done and then “focus our hearts and minds on the priorities of the British people”.

Labour is promising to “transform” the UK and to renegotiate Mr Johnson’s withdrawal deal with the EU and hold a legally binding referendum on a replacement deal.

But Mr Blair, who won general elections in 1997, 2001 and 2005, was critical of both parties, saying: “I don’t think a majority government of either side is a good thing.”

“Both as majority governments pose a risk,” he said.

Mr Blair reiterated his call for a further referendum on Brexit, arguing that this would “untie the knot”.

This, he added, should be followed by a fresh election to decide the “merits” of party leaders vying to run the country.

The Conservatives have pledged to take the UK out of the EU by January 2020 by getting Mr Johnson’s Brexit ratified by Parliament.

But Mr Blair said it was unrealistic to suggest a trade deal with the EU could then be negotiated in the 11-month transition period – during which the UK would continue to follow EU laws and customs rules – that would follow.

The Conservative manifesto rules out any extension of this period.

Labour has pledged to renegotiate Mr Johnson’s deal and then put it to another referendum, alongside the option of staying in the EU.

Mr Corbyn has confirmed he would not campaign for either side in such a vote, arguing it would allow him, as prime minister, to act as an “honest broker” afterwards.

In his speech, Mr Blair said his party’s manifesto – promising to renationalise rail, mail, water and energy – was offering a “revolution”.

But he cautioned: “The problem with revolutions is never how they begin, but how they end.”