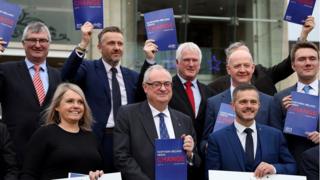 The Ulster Unionist Party wants a hung parliament so its MPs can “exert their influence” and stop Boris Johnson’s Brexit deal, its leader has said.

Steve Aiken was speaking as he launched the UUP’s general election manifesto.

He said the party wants “to see Parliament come back in such a way that neither (Conservatives or Labour) has an opportunity to form a government”.

He added this would make any UUP MPs “very influential” in ensuring Mr Johnson’s deal is taken off the table.

The UUP backed Remain in the 2016 EU referendum but, after the result, said the decision to leave should “be respected” and that Northern Ireland should exit the EU on the same basis as the rest of the UK.

However, the party has rejected the Brexit deal negotiated by Mr Johnson and claimed it creates “a border down the Irish Sea”, meaning Northern Ireland would become “a place apart”.

‘No unionist could support Johnson’

Launching the manifesto, Mr Aiken described the decision to leave the EU as “the biggest political earthquake” the UK has experienced since World War Two.

He added that, faced with Mr Johnson’s deal, the party would prefer to remain in the EU than leave under his agreement.

Referring to the deal, Mr Aiken said: “Northern Ireland will be torn away from its most important economic market – Great Britain.”

The party is standing in 16 seats across Northern Ireland, but is not running candidates in West Belfast or North Belfast.

In the latter, the UUP stepped aside to support Nigel Dodds from the Democratic Unionist Party (DUP).

The decision to step down came after a U-turn by the party leadership – originally Mr Aiken said the UUP would stand, leading to threats being issued against party staff.

The DUP has stepped aside in Fermanagh and South Tyrone to support UUP candidate Tom Elliott.

Mr Elliott, a former party leader, lost his seat in the 2017 general election along with the party’s other MP Danny Kinahan.

The manifesto, entitled “Northern Ireland Needs Change – Let’s Change Together”, was launched at a Belfast hotel in front of journalists, candidates and party members.