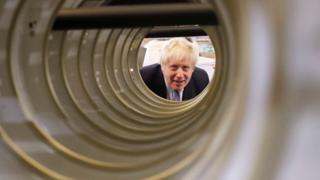 If you’ve been following the election campaign so far – you probably know the main messages from the main politics parties.

The Tories – Get Brexit Done

But it’s the off the cuff comments – the things that let us know a bit more about the parties who want to run the country – that are often the most interesting.

Boris Johnson let one slip on Wednesday when – we think accidentally – he told a voter he was going to cut the amount of national insurance we pay by raising the threshold to £12,000. Cue a mad dash to confirm the details (£9,500 in first budget – £12,500 at some point in future).

Mr Johnson also sat down with political journalists for a chat – which gives us some more clues about what he’d do if he retains power.

It’s clear the PM is planning some sort of announcement on social care in the Tory manifesto – expected in the next few days.

At the heart of his pledge will be ensuring that nobody has to sell their home to pay for their care. We await details on what the promised new policy will look like.

Mr Johnson also made it clear his instinct is to keep going with the HS2 high speed rail network – despite concerns over its price and the fact a review into the project has not yet been published (although we have seen a leaked draft suggesting it should continue).

Mr Johnson said: “You have to look at the size of the bill. It’s huge. You have to consider the thick end of £100bn is being properly spent and whether we are profiling that spend correctly.”

“You know where my instincts are. I’ve overseen a great number of very big infrastructure projects.