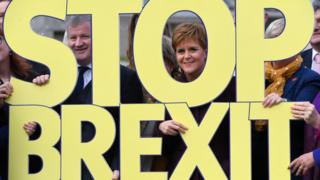 With one week to go in the election campaign, Scotland’s parties are desperate to hammer home their key messages to voters. Where do their slogans come from, and why do they stick to them so religiously?

Almost every SNP speech, press release and media comment going back to day one contains the words “escape Brexit”, “lock Boris Johnson out of office” and “put Scotland’s future in Scotland’s hands”. We’re talking about three or four statements per day, all containing those exact same phrases.

Nicola Sturgeon, 2 November: “A vote for the SNP is a vote to escape Brexit, and to put Scotland’s future in Scotland’s hands – not Boris Johnson’s.”

Nicola Sturgeon, 6 December: “A vote for the SNP is a vote to escape Brexit, and to put Scotland’s future in Scotland’s hands – not Boris Johnson’s.”

The Scottish Conservatives have based their entire campaign on opposition to an independence referendum, and indeed could actually be re-using a lot of their “no to indyref2” material from 2017 if it didn’t have ex-leader Ruth Davidson’s face all over it.

Labour candidates struggle to utter a sentence without opening with “real change” and tacking “for the many, not the few” on the end.

And the Lib Dems have pledged more or less daily to “build a brighter future” by stopping Brexit and independence.

Image copyright Getty Images Image caption You’ll never guess what the Scottish Tory slogan is
Why does this happen?

Politicians are very keen to stay on-message. These lines you hear again and again don’t happen by accident – they’re chosen very carefully, after plenty of stress-testing and scrutiny in focus groups.

These slogans need to encapsulate what the party stands for in a concise, memorable phrase – and, importantly, be robust enough to stand up to the rigours of a six-week campaign.

Theresa May was ultimately haunted by her own “strong and stable” mantra, because it was quite easy to add a question mark whenever she had a wobble.

Once chosen, politicians have to repeat their favourite lines over and over – because most of the time, most people just aren’t listening.

Each week, Lord Ashcroft conducts a poll asking “what incidents, events, stories etc. have you noticed from the election campaign in the last few days?”