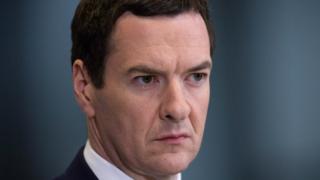 Former chancellor of the exchequer George Osborne is to stand down from his role as editor of London’s Evening Standard newspaper.

His replacement is Emily Sheffield, a columnist on the newspaper, BBC Media Editor Amol Rajan confirmed.

Osborne is moving to the more managerial role of the newspaper’s editor-in-chief.

Rajan said the print title will continue for now but is in “desperate financial trouble”.

In response, the incoming editor tweeted that the newspaper “remains a core element to this outstanding legacy news organisation.

“It has survived this crisis and it will survive many more,” added Sheffield.

The newspaper’s owner, Evgeny Lebedev, said he was “delighted” Sheffield was taking the helm at the newspaper and was “very pleased” Osborne would be editor-in-chief.

Osborne thanked his colleagues at the newspaper and said of his replacement: “She will bring creativity, commitment and experience to the job – and take the Standard, online and in print, through the next exciting chapter in its long history.” 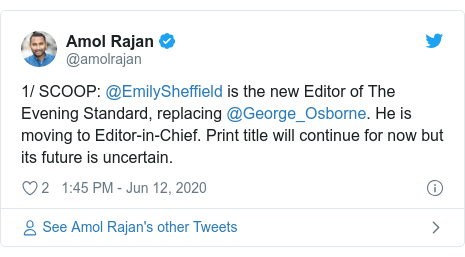 Osborne is also chair of the Northern Powerhouse Partnership and holds a £650,000-a-year post advising the investment fund BlackRock.

Last year he was made chairman of a panel of advisers to Exor, which owns the Italian football club Juventus and has major stakes in Ferrari and Fiat Chrysler cars. 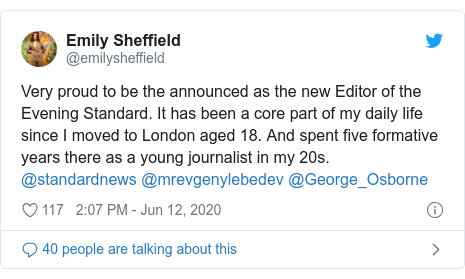 Osborne left government in 2016 after the Brexit referendum and he stood down as MP for Tatton in Cheshire in 2017.

According to The Guardian, prior to the Covid-19 lockdown, the Evening Standard’s circulation was about 800,000 daily copies in the capital, but it was struggling due to an industry-wide decline in advertising revenues.

Due to its reliance on readers using public transport, the Evening Standard was reported to have distributed just over 423,000 copies a day in April, after the nation went into lockdown.

Osborne’s replacement, Sheffield, will remain director of a female news brand she launched called This Much I Know, and will be “tasked with making it a digital first operation” added Rajan.

“That’s a extremely difficult challenge for a title so heavily dependent on print for its income,”