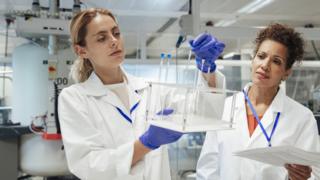 A fast-track UK visa for scientists, mathematicians and researchers will be launched next month, the prime minister has said.

The Global Talent visa will be open from 20 February to those who work in a qualifying field and have been endorsed by a recognised UK body.

Boris Johnson said he wanted to emphasise “that the UK is open to the most talented minds in the world”.

Labour and the Lib Dems said the plans did not go far enough.

The PM said in his announcement that the UK “has a proud history of scientific discovery, but to lead the field and face the challenges of the future we need to continue to invest in talent and cutting-edge research”.

“That is why as we leave the EU I want to send a message that the UK is open to the most talented minds in the world, and stand ready to support them to turn their ideas into reality,” he said.

It follows Mr Johnson’s pledge last month to turn the UK into a “supercharged magnet to attract scientists like iron filings”.

Home Secretary Priti Patel hailed the new route as part of “decisive action” to maximise the number of world-class researchers given fast-tracked entry to Britain.

There is no cap on the number of people who can use the new Global Talent visa – the one it replaces was capped at 2,000 per year.

But the Lib Dems suggested this cap had never been hit and that the changes were little more than cosmetic.

“Changing the name of a visa and removing a cap that’s never been hit is not a serious plan,” the party’s home affairs spokesperson Christine Jardine said.

The new visa system will begin on 20 February and be managed by the UK Research and Innovation Agency (UKRI), which funds government research, rather than the Home Office.

This is to ensure that suitable applicants are quickly assessed and fast-tracked.

EU researchers account for about half of the total UK scientific workforce of 211,000.

Currently, they do not need visas to work in British labs. But freedom of movement between the UK and EU is expected to end after the Brexit transition period on 31 December 2020.

The government says it will introduce an Australian-style point-based system by January 2021.