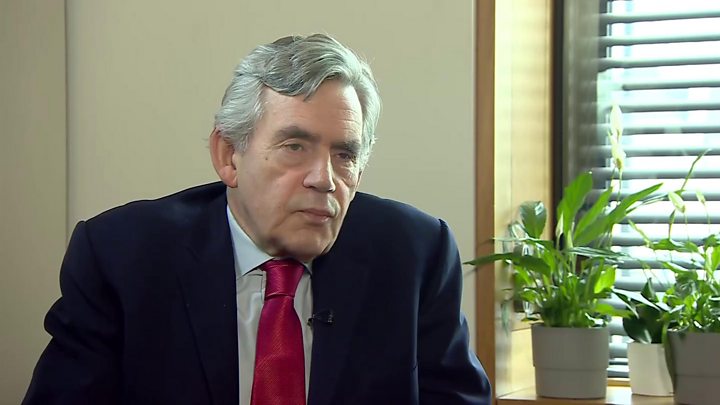 Gordon Brown has warned the United Kingdom is at breaking point and could end unless the nations and regions get a real “voice” in decision-making.

The ex-prime minister told the BBC too much political and economic power was concentrated in London and the UK had to change “from top to bottom”.

What was needed was a “constitutional revolution”, not “cosmetic” ideas such as re-locating the House of Lords.

Labour, he added, needed to “sort itself out” to return to power.

Speaking to the BBC’s political editor Laura Kuenssberg, he said he would not be backing any leadership candidate at this stage and would have more to say later in the contest.

But Mr Brown, who was Labour leader between 2007 and 2010, said the party needed to “look at itself” when it couldn’t win an election after a decade of austerity and with standards of living stagnating.

He also said the SNP had not “made the case” for another Scottish independence referendum and he hoped Labour and other political parties would come forward with alternative proposals for further devolution in Scotland.

The union ‘could end’

Mr Brown has spoken out before about his concerns that the 300 year political and economic union between England, Scotland, Wales and Northern Ireland was in peril.

But, in his strongest warning to date, he said the Brexit vote showed the UK was “not at ease with itself” and there needed to be “fundamental” change once the UK had left the EU.

“Unless the regions and nations feel they have a voice that is respected in the United Kingdom, the UK’s three hundred year old history may at some point soon be over,” he said.

“We have to give more power to people in the communities and in the localities and the regions. We have a far too over-centralised state based in one part of the country – an administrative, political and financial centre that excludes power from people out in the regions.”

He said he regretted that in its 13 years in power, Labour had not done more to challenge regional disparities, saying its plans to devolve political and economic powers had been insufficient.

Mr Brown said there needed to be wholesale change to repair the “social contract” between individuals and the state – with a focus on quality jobs, improved public services and urban regeneration.

Reflecting on proposals floated over the weekend to move the House of Lords to York, he said the economic needs of the north of England were wholly different from the south and symbolic transfers of power would not do.