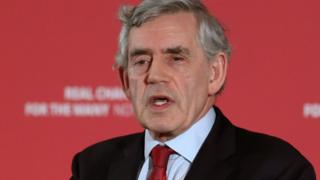 Gordon Brown has warned that under Boris Johnson the union of England, Scotland, Wales and Northern Ireland is “sleepwalking into oblivion”.

Writing in the Observer, Mr Brown blamed “destructive, nationalist ideology” and said the ideal of Britishness as tolerant “could not survive” a no-deal Brexit.

“We are, at best, only a precariously united kingdom,” Mr Brown wrote.

It comes after Mr Johnson travelled to all four parts of the UK in his first few weeks in office, with No 10 saying he was a “passionate believer in the power of the Union”.

Mr Johnson has said the UK will leave the EU on the current deadline of 31 October, whether a Brexit “divorce” deal – which sets out how Britain leaves – is agreed in time or not.

Meanwhile plans for a no-deal Brexit have accelerated. On Saturday it emerged the Treasury was planning to mint millions of 50p “Brexit” coins as a “statement of intent” that the government was serious about leaving the EU.

In his article, Mr Brown – prime minister between 2007 and 2010 – criticised Mr Johnson’s government, which he said was driven “not by the national interest but by a destructive, populist, nationalist ideology”.

“We must recognise that nationalism is now driving British politics,” he wrote.

Under Mr Johnson’s premiership, claimed Mr Brown, the UK is “devoid of a unifying purpose powerful enough to hold it together and to keep four nationalisms – Scottish, Irish, English and also a rising Welsh nationalism – at bay”.

Citing recent polling about people’s attitudes to the union, he added: “What is most worrying is not just that so many think the union will end but how at least for now so few appear to care.”

A recent opinion poll for YouGov indicated that a majority of Conservative Party members prioritise leaving the EU over preserving the union.

Some 63% of respondents said they would rather Brexit took place even if it led to Scottish independence, and 59% expressed the same view about Brexit leading to Northern Ireland leaving the UK.

Mr Brown wrote: “Unionism appears to be sleepwalking into oblivion and the UK, once admired around the world for an understated but comfortably unifying Britishness that was inclusive,