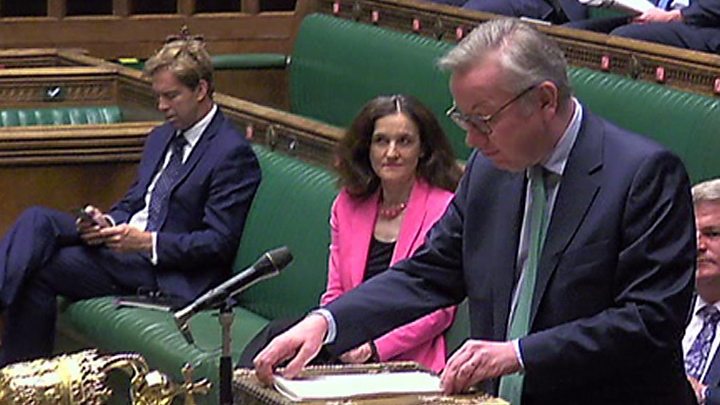 A minister has accused the EU of holding up post-Brexit trade talks with its “ideological approach” as the UK publishes legal texts for negotiations.

Michael Gove said the third round of talks with the bloc – which ended on Friday – were “constructive”.

But he said there were “significant differences of principle”, and it “remained difficult to reach a mutually beneficial agreement”.

The EU’s chief negotiator has warned the UK’s demands are “not realistic”.

Speaking on Friday, Michel Barnier said he was “still determined but not optimistic” about agreeing a deal.

The UK left the EU on 31 January, entering an 11-month transition period, where the country continues to follow a number of the bloc’s rules while negotiating a trade deal.

The government has repeatedly ruled out extending the transition period, and has said it will go onto trading with the EU on World Trade Organisation rules comes 2021 if no agreement has been reached.

But critics have said this could damage the UK economy.

On Tuesday, the government published 13 documents “setting out our approach to our future relationship with the European Union”, including its outline of a free trade agreement – which “draws on previous EU agreements” with the likes of Canada, Japan and South Korea.

It has also proposed a separate agreement on fisheries, on law enforcement, and in technical areas covering aviation, energy and civil nuclear cooperation.

It said its approach was based on “friendly cooperation between sovereign equals” and “represents our clear and unwavering view that the UK will always have control of its own laws, political life and rules.”

But Mr Barnier has said the EU is not prepared to “copy and paste” aspects of existing agreements with other countries or do sector-by-sector deals “rooted in past precedents”.

Answering an urgent question from Labour on last week’s discussions with the EU, Chancellor of the Duchy of Lancaster Mr Gove said there remained differences between the two sides – notably on fisheries and the so-called “level-playing field” rules.

A level-playing field is a term for a set of common rules and standards that prevent businesses in one country undercutting their rivals and gaining a competitive advantage over those operating in other countries.

Mr Gove told MPs: “The EU essentially wants us to obey the rules of their club, even though we are no longer members,