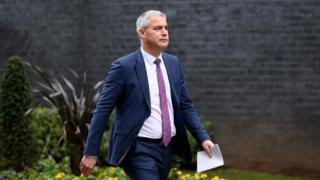 The Department for Exiting the European Union (DExEU) will be closed down on 31 January – Brexit deadline day.

The government department, led by Brexit Secretary Stephen Barclay, oversaw negotiations between the UK and EU on the exit and future relationship.

The exit deal is now contained within a bill, expected to pass Parliament with the Conservatives’ 80-strong majority.

Staff were told about the closure on Thursday, but the PM’s spokesman said they would help them find jobs.

A statement from No 10 said: “The Department for Exiting the European Union will be wound up once the UK leaves the EU on the 31 January.

“DExEU staff have been spoken to today. We are very grateful for all their work and we will help everyone to find new roles.”

The bill to implement the PM’s Brexit deal has been formally presented to the Commons, and MPs will hold an initial vote on it on Friday.

Detailed scrutiny of the legislation is then expected to take place early next month, before the bill is sent to the House of Lords.

The Brexit department was set up by former Prime Minister Theresa May in 2016 in the wake of the referendum result.

DExEU has had three Brexit secretaries in its three years – starting with David Davis, who resigned in 2018 in disagreement with Mrs May