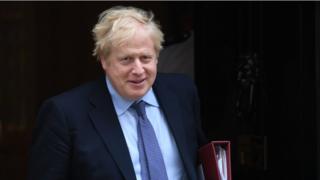 The government will publish its strategy for post-Brexit trade talks later, as it prepares for formal negotiations with the EU to begin.

Brussels has already set out what it wants from the talks – tariff-free trade but keeping EU rules on state aid, workers rights and other issues.

The plan received a cool reception from No 10, with the PM saying he is prepared to walk away without a deal.

The government’s strategy will be put online and presented in Parliament.

The UK officially left the EU at the end of January, but is continuing to abide by many EU rules while talks on a permanent trading relationship take place.

Boris Johnson has pledged to get a deal with the EU by the end of the so-called transition period – 31 December 2020 – and has said he is not prepared to extend that deadline.

But critics say leaving without an agreement and going to World Trade Organisation rules – the terms countries use to set tariffs (taxes) on goods when they do not have free-trade deals – could damage the economy.

Negotiations are due to start in Brussels on 2 March.

The UK’s team will be lead by Mr Johnson’s Europe adviser David Frost. The chief negotiator of the Brexit withdrawal agreement, Michel Barnier, will head up the EU’s delegation.

Both Mr Frost and the prime minister have said in recent weeks they want to seek a Canada-style agreement with zero tariffs from the EU.

Mr Barnier has rejected such a deal, saying the UK is not like Canada, and its geographical proximity would threaten competition between EU states.

All members of the committee supported Brexit during the 2016 referendum.

The EU’s 46-page negotiating document, published on Monday, said the “envisaged agreement should uphold common high standards, and corresponding high standards over time with Union standards as a reference point”.