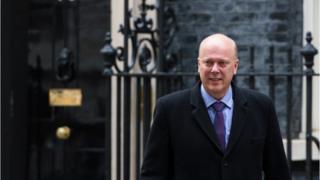 Transport Secretary Chris Grayling has defended the government’s choice of a UK company with no ships as one of the providers of extra ferry services in the event of a no-deal Brexit.

Mr Grayling told the BBC he would make no apologies for “supporting a new British business”.

The firm, Seaborne Freight, won a £13.8m contract to run a freight service between Ramsgate and Ostend.

But a BBC investigation discovered it had never run a ferry service before.

Mr Grayling told the Today programme that the government had “looked very carefully” at the business.

“We have put in place a tight contract to make sure they can deliver for us,” he added.

The contract award notice reveals that the tender process took place “without prior publication of a call for competition”.

It states that the limited process was due to “a situation of extreme urgency” in the run-up to the UK’s EU departure date.

The document shows that the contract received a single bid, from Seaborne Freight.

The Road Haulage Association (RHA), which represents firms bringing freight to and from UK ports, said its members were worried about how their trucks will get across the Channel.

Seaborne Freight will need to “source ferries, hire and train staff and link with relevant authorities”, according to Rod McKenzie, a managing director at the RHA.

“It looks an impossible timescale.”

Seaborne Freight was formed in April 2017 to revive the Ramsgate-Ostend line.

Dredging works will begin at Ramsgate harbour on Thursday morning, in order to clear access for larger ships.

He declined to give details on the ships it planned to use for the service, saying the information was commercially sensitive.