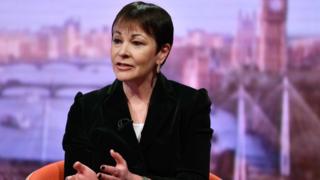 Caroline Lucas has asked 10 female politicians from all parties to join her in forming an “emergency cabinet” in a bid to stop a no-deal Brexit.

Writing in the Guardian, the Green Party MP said the all-women cabinet could “bring a different perspective”.

Ms Lucas, whose party wants another Brexit referendum, said the aim would be to force a no-confidence vote in Prime Minister Boris Johnson.

She would then hope to form a “national unity government”.

This arrangement – when a group of MPs of multiple parties choose to work together and form a government – has not been seen since the Second World War.

In her Guardian comment piece, Ms Lucas – who used to be the Green Party leader – wrote: “We need an ’emergency cabinet’ – not to fight a Brexit war but to work for reconciliation.

“And I believe this should be a cabinet of women.

“Why women? Because I believe women have shown they can bring a different perspective to crises, are able to reach out to those they disagree with and cooperate to find solutions.”

Under her proposals, the national unity government would “press the pause button” and organise another referendum offering a choice between Remain or the government’s Brexit plan, whether that is an agreed deal or no deal.

She added: “This is not an attempt to replace one coup with another.

“A small group of us should not be deciding on Britain’s future and that is not what lies behind my initiative.

“But we need to find a way forward that allows the British people to decide which course they want to take.”

She has asked to meet the 10 women in the coming days.

It’s not known whether any of the women have accepted Ms Lucas’s invitation.

But her suggestion has attracted widespread discussion on social media, with many people expressing criticism.

Labour’s shadow home secretary Diane Abbott tweeted it “won’t work… whatever the gender of the participants”.

Backdoor route to a National Government. Didn’t work for Ramsey Mcdonald and won’t work now, whatever the gender of the participants https://t.co/ru0CbHwrK4