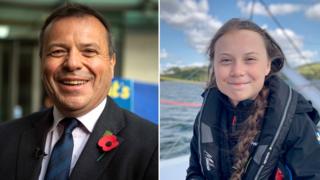 On Wednesday, Mr Banks referred to Ms Thunberg’s sea voyage across the Atlantic and tweeted: “Freak yachting accidents do happen in August…”

Ms Thunberg, who chooses not to fly, is sailing from the UK to attend UN climate summits in New York and Chile.

Ms Lucas said she reported his comment, while Mr Banks said it was a joke.

“Arron Banks’ vile tweet about @GretaThunberg makes me sick to the stomach,” Ms Lucas wrote on Twitter on Thursday morning.

Ms Thunberg set sail from Plymouth on Wednesday at the start of her two-week journey to New York and Chile.

The 16-year-old refuses to travel by air because of its environmental impact, so has chosen a carbon-neutral racing yacht.

His tweet faced widespread criticism, with Mr Banks later responding, saying it was “a joke” and accusing his critics of having “no sense of humour”.

“I just enjoy watching the ludicrous tweeter mob following the next outrage.”

Among those who condemned his post was actress Amanda Abbington, who tweeted: “You’re wishing a potentially fatal accident onto a sixteen year old girl, why..?”

Others called his tweet “disgraceful” while Labour MP Paula Sherriff said he was “utterly vile”.

The novelist Philip Pullman said: “That’s how you’ll be remembered, Banks. That’s the measure of you.”