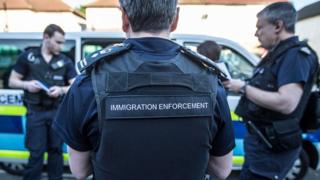 The Home Office has “no idea” what its £400m-a-year immigration enforcement unit achieves, meaning it is unprepared for Brexit, MPs have warned.

The cross-party Public Accounts Committee said a lack of diversity at the top of the department also risked a repeat of the Windrush scandal.

Its policies may be based purely on “assumption and prejudice”, it warned.

A Home Office source said the home secretary has committed to implementing the findings of a review into Windrush.

The Home Office’s 5,000-strong Immigration Enforcement directorate, and other parts of the system, have been repeatedly reorganised since being branded “unfit for purpose” 15 years ago by the then home secretary.

The latest massive changes will come in January to deal with the end of freedom of movement.

In the highly critical report, the influential committee said officials were reliant on “disturbingly weak evidence” to assess which immigration enforcement policies worked, and why.

Officials had no idea how many people are living illegally in the UK, no idea what their impact was on the economy and public services – and no means of countering claims that could “inflame hostility”.

“We are concerned that if the department does not make decisions based on evidence, it instead risks making them on anecdote, assumption and prejudice,” said the MPs.

“Worryingly, it has no idea of what impact it has achieved for the £400m spent each year.”

The MPs said the the department showed too little concern over failures.

It risked a repeat of the Windrush scandal in which people with a right to be in the UK were treated as illegal immigrants because the Home Office had lost records of their status or did not believe the evidence they provided.

“The significant lack of diversity at senior levels of the department means it does not access a sufficiently wide range of perspectives when establishing rules and assessing the human impact of its decisions,” said the MPs. “Professional judgement cannot be rel