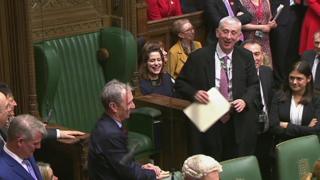 Labour’s Sir Lindsay Hoyle has been re-elected as Commons Speaker, as MPs return to Parliament after the election.

Sir Lindsay pledged his office would be “open to all,” after he was returned unopposed into the role he first took up last month.

The process of “swearing in” MPs has begun, and the government will outline its legislative plans on Thursday.

They will be asked to vote on the PM’s Brexit deal bill on Friday.

Speaking in the Commons for the first time since gaining an 80-seat majority in last week’s poll, Boris Johnson pledged to “find common ground” with other parties.

The prime minister pledged to end “three and a half years of wrangling and division” in Parliament, and repeated his campaign pledge to “get Brexit done”.

He vowed that the “people’s Parliament” would be “vastly more democratic” and a “vast improvement on its predecessor”.

“This Parliament is not going to waste the time of the nation in deadlock, and division and delay,” he added.

Mr Johnson was welcomed with a huge cheer by his backbenchers as he arrived in the Commons, contrasting with a much more muted greeting for his Labour counterpart Jeremy Corbyn.

Mr Corbyn congratulated the prime minister on his election victory, and said he would be “judged” on the “many, many promises” he made during the campaign.

“Our job in the Labour party will be to hold this government to account, and stand up for the communities that we represent,” he added. 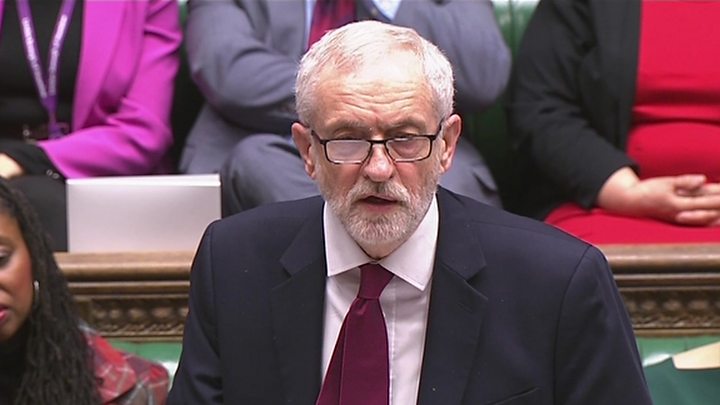 Media captionJeremy Corbyn congratulates the PM on his election victory

Mr Corbyn will step down in the new year after the party slumped to its worst election performance since 1935.

A number of possible contenders are in the frame for the contests to replace them that will take place next year.

Mr Corbyn is expected to address a closed-door meeting of Labour MPs later on Tuesday for the first time since the election.

Meanwhile, the government has said a new clause will be added to its Brexit bill to rule out any extension to the post-Brexit transition period.

The amended Withdrawal Agreement Bill would seek to prevent ministers from prolonging the 11-month period, due to conclude in December 2020.

Ministers say they will use this time to reach a trade agreement with the EU, but critics say this will not be possible.

However with its large majority,