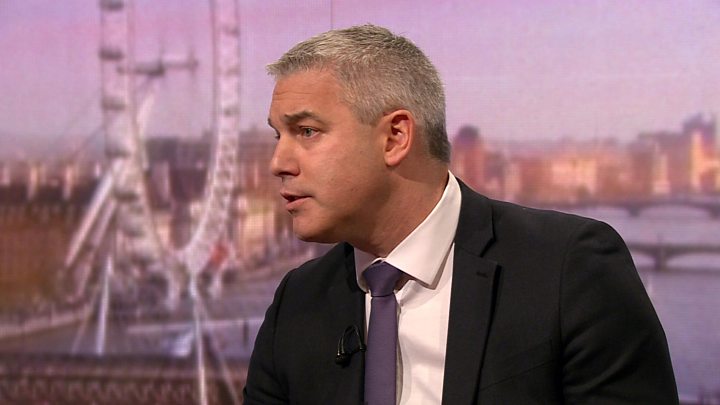 A cabinet minister has told the BBC it is his gut feeling that the HS2 high-speed rail line will get the go-ahead.

Stephen Barclay told the BBC’s Andrew Marr Show that the project was vital for “levelling up” the UK’s transport network and improving capacity.

The Brexit secretary’s comments come amid a row over the rising cost of the project, which could reach £106bn.

The first phase of the project is due link London and Birmingham, followed by extensions to Leeds and Manchester.

Mr Barclay was asked by Andrew Marr for his “gut feeling” about whether the HS2 would be approved. “Yes”, he replied firmly.

He said the government had given a “clear commitment to level up all parts of the United Kingdom… HS2 plays an important part in that”.

That levelling up was not just about improving the speed of transport, but also improving capacity in the UK.

Mr Barclay stressed, though, that it was “important that we also get value for money”.

Earlier this month, a leaked government-commissioned review suggested the total cost of HS2 could reach £106bn.

The findings of the independent review, conducted by former HS2 Ltd chair Doug Oakervee, have not yet been officially published. The Department for Transport has indicated it will be published soon.

Lord Berkeley, a vocal critic of HS2 who was deputy chairman of the Oakervee review before withdrawing his backing, published an independent assessment of the project.

He put the cost at at least £108bn, adding that the government should scrap the project to concentrate on improving the rail network in the north of England.

That drew criticism from northern political leaders and businesses, who said HS2 should be built in its entirety.

Whitehall’s spending watchdog said last week that HS2 is over budget and behind schedule because its complexity and risks were under-estimated.

The National Audit Office (NAO) warned that it is impossible to “estimate with certainty what the final cost could be”.

Construction firms have warned that scrapping HS2 would cause major damage to the industry,