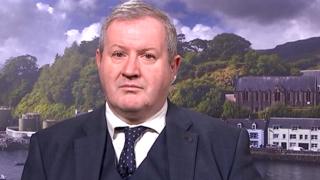 The SNP’s Westminster leader has branded Boris Johnson “a democracy denier” for refusing to allow a second Scottish independence referendum.

Ian Blackford said the prime minister had “completely trampled over the devolution settlement” and people in Scotland were “right to be outraged”.

He said the SNP would now embark on “a broad-based campaign” to mobilise public opinion for indyref2.

First Minister Nicola Sturgeon is to reveal her indyref2 plans on Wednesday.

Mr Blackford also told the BBC’s Sunday Politics Scotland programme that the prospect of Scottish independence offered “a beacon of hope” to those who wanted to remain in the EU.

‘Keep a light on’

It came after the Scottish Parliament and the assemblies in Wales and Northern Ireland rejected the UK government’s Brexit Bill.

It was, however, given Royal assent last week – meaning the UK will formally leave the EU on Friday.

Mr Blackford said the SNP would be working with civic Scotland and EU leaders in a bid to make sure a second independence referendum takes place this year.

He said: “We have to mobilise public opinion. I will be meeting with the EU ambassadors in London to press the case for Scotland’s right to have that referendum and for our European friends to stand with us to keep that light on for us.

“We will be engaging with civic Scotland. I’m grateful that many figures in the Labour movement have agreed it is about Scotland’s right to choose.

“Are the people of Scotland prepared to sit back and see a government in London that’s going to ignore our democratic right?

“We will mount a broad-based campaign to make sure we can deliver on the mandate we have.”