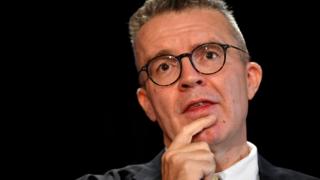 Ibrahim Dogus is to replace Tom Watson as West Bromwich East’s Labour candidate after the deputy leader said he would not stand for re-election.

Mr Dogus, a restaurant entrepreneur and Labour councillor, is the current mayor of Lambeth.

Mr Watson, an MP for 18 years, announced on the first day of the election campaign he would be standing down.

He cited “personal, not political” reasons for his decision.

Mr Dogus, who owns three restaurants in London, said he was “proud” to have been selected as the candidate and “would waste no time at all taking the fight to the Tories”.

Image caption Ibrahim Dogus is currently the mayor of Lambeth

“I’d like to pay a huge tribute to Tom Watson, who served the people of the West Bromwich East constituency so diligently,” he added.

“I am proud to call him a friend, and recognise I have big shoes to fill as the Labour candidate.”

He said he was looking forward to “meeting local people and listening to their concerns”.

“I relish the chance to fight for local people, to champion communities and businesses, and to deliver the decent services people round here deserve.”

Earlier this year Mr Dogus received death threats on social media for putting an anti-Brexit message on receipts at his restaurants.

He refused to remove the message that read “Brexit is bad! Immigrants make Britain great! They also cooked and served your food today.”