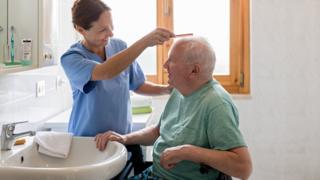 A minister has been criticised after saying social care employers should “redouble” their efforts to recruit UK workers ahead of immigration changes.

A leader in the sector has described Helen Whately’s remarks as “lazy thinking” while a long-serving Tory MP has accused the government of making “facile arguments” that “don’t wash”.

The free movement of EU nationals to the UK will end on 31 December.

Ministers say they are “continually monitoring” the effect this will have.

A “points-based” post-Brexit immigration system is due to be introduced next year under which workers, who are classed as “low-skilled”, will be unable to get visas.

Under the new system, foreign nationals who want to work in lower paid care jobs are likely to fall short of the 70 points required to apply.

This has led to warnings that it will be increasingly difficult to fill an estimated 122,000 vacancies in social care in England.

The Conservative MP, Sir Roger Gale, submitted a question to the government asking what plans there are to tackle “potential labour shortages” in the care sector as a result of planned immigration controls.

In response, the Social Care Minister Helen Whately said: “We are continually monitoring and analysing the impact on both cost and numbers of staff in the National Health Service and social care sector as a result of multiple changes including the future immigration system.”

“The changes to the immigration system and the ending of freedom of movement will mean that social care employers will need to redouble efforts to promote jobs in social care to workers in the United Kingdom.”

But Sir Roger Gale said that care homes were already closing at an “alarming rate” and that it wouldn’t be possible to “press gang” people into working in the sector.

The MP for North Thanet suggested the government must know councils cannot afford to pay the kind of fees that would enable care home providers to pay higher wages.

“But even if they could, the next question has to be ‘would I have wanted my mother to have been cared for in the residential home she ended her days in by somebody who didn’t