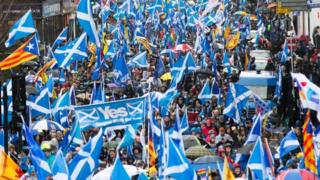 The Scottish government has confirmed it is no longer planning to hold an independence referendum this year.

Constitution Secretary Mike Russell said the plans had been “paused” due to the coronavirus pandemic.

He said the move would allow the government to focus all of its resources on the health crisis.

In a letter to the UK government, he said: “It follows from this that a referendum will not be held this year.”

Mr Russell urged the UK government to place a similar pause on the EU/UK negotiations in the Brexit process.

Scottish Conservative shadow constitution secretary Murdo Fraser said putting the referendum preparations on hold was welcome news and would “come as a relief to workers and businesses alike”.

The letter, which was sent to UK cabinet minister Michael Gove, said: “Because of the crisis, the Scottish government has paused work on preparing for an independence referendum this year.

“We have also written to the Electoral Commission to make clear we do not expect it to undertake testing of a referendum question until public health circumstances permit such activity.

“That will allow us to focus all available resource on current and future demands in what is an unprecedented set of circumstances.

“It follows from this that a referendum will not be held this year.”

Mr Russell went on to “strongly suggest” that the UK government takes similar action with regard to the Brexit process by pausing negotiations with the UK for at least six months.

He said: “It would seem impossible for business and others to cope with the enormous challenge of coronavirus while at the same time preparing for a completely new relationship with the EU in nine months’ time.”

Scottish Liberal Democrat leader Willie Rennie commended Mr Russell for “a very sensible decision in the face of this overwhelming crisis facing us all”.

The Scottish Greens said it was right