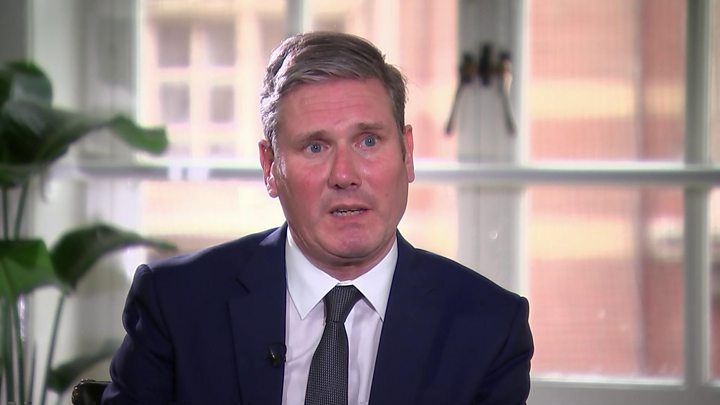 Media captionKeir Starmer says he would not “be doing a hypothetical for what would happen after May”.

Labour leader Sir Keir Starmer has refused to rule out the possibility of supporting a second referendum on Scottish independence in the long term.

But he told the BBC a vote like the one held in 2014 was “not needed” soon and the focus should be on “rebuilding” the economy and services after coronavirus.

His party would not campaign for a referendum in next May’s Scottish Parliament elections, he added.

The SNP government in Scotland wants to hold one as soon as possible.

And he argued Prime Minister Boris Johnson did not have “the right character” to deal with the challenges posed by the pandemic.

When Scotland’s voters were asked in a referendum in 2014 whether the country should become independent, 55% said no.

But the SNP has campaigned for a second poll since the UK’s 2016 decision – in the Brexit referendum – to leave the EU.

It says the difference between the UK-wide result and that in Scotland – which chose by 62% to 38% to remain within the bloc – strengthens the case for independence.

It has also been suggested that, following the next UK general election, expected in 2024, Labour could need the support of the SNP if it wants to form a government. This might, it is added, require a deal on having another referendum.

Sir Keir said: “We will be going into that election in May making it very clear that another divisive referendum on independence in Scotland is not what is needed.

“What is needed is an intense focus on rebuilding the economy, on making sure public services are rebuilt as well and dealing with the pandemic.”

Pressed on what would happen after May, Sir Keir said: “We don’t know… In politics, people tell you with great certainty what is going to happen next year and the year after, but it doesn’t always turn out that way.”

He added: “I am setting out the argument we will make into May. I am not doing a hypothetical of what will happen after that.”

The Scottish government, led by First Minister Nicola Sturgeon, had hoped to hold an independence referendum during the current term of the Scottish Parliament.