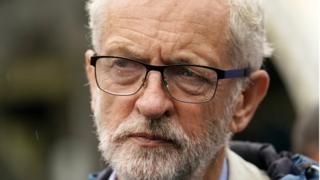 Jeremy Corbyn will say today the UK is facing a Brexit “crisis” and will vow to do “everything necessary” to stop the UK leaving the EU without a deal.

The Labour leader will say the Tory party has “failed our country” and a general election is the “change of direction the country needs”.

It comes after a leaked government report warned of food and medicine shortages in a no-deal exit.

Mr Gove, who is responsible for no-deal preparation, said the cross-government study, codenamed Operation Yellowhammer, was old and that Brexit planning had accelerated since Boris Johnson became prime minister.

A No 10 source told the BBC it was leaked to the Sunday Times by a disgruntled ex-minister in an attempt to influence discussions with EU leaders.

But a former head of the civil service, Lord Kerslake – who described the document as “credible” – said the dossier “lays bare the scale of the risks we are facing”.

In a speech later, Mr Corbyn will say the Tories have “lurched to the hard right under Boris Johnson”, calling him “Britain’s Trump”.

“A general election triggered by the Tory Brexit crisis will be a crossroads for our country. It will be a once-in-a-generation chance for a real change of direction, potentially on the scale of 1945 or 1979,” he will say.

“Labour believes the decision on how to resolve the Brexit crisis must go back to the people.”

Last week, Mr Corbyn urged leaders of the other opposition parties and Tory rebels to install him as caretaker PM in order to stop a no-deal Brexit.

He said if he won a vote of no-confidence in the government that he would delay Brexit, call a snap election and campaign for another referendum.

“This is a cynical attempt to seize power by a man who would wreck the economy, is soft on crime and won’t stand up for Britain.

“Only Boris Johnson and the Conservatives can provide the leadership Britain needs and deliver Brexit by 31 October,