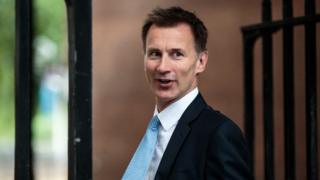 Jeremy Hunt is among a clutch of former cabinet ministers seeking election to chair a House of Commons select committee.

The ex-health secretary will face fellow Tory MP Anne Marie Morris in the contest to chair the health and social care committee.

Twenty-seven committee chair posts are up for election following the dissolution of Parliament last month ahead of December’s general election.

Latest nominations also show Labour MP Hillary Benn wants to to continue his chairmanship of the Brexit select committee he has led since late 2016.

It was set up to scrutinise the work of the Brexit department, which is due to shut down at the end of the month. But the committee will now turn its attention to UK-EU trade talks.

Among other declared runners, former Welsh secretary Stephen Crabb has thrown his hat into the ring to chair the Welsh affairs committee.