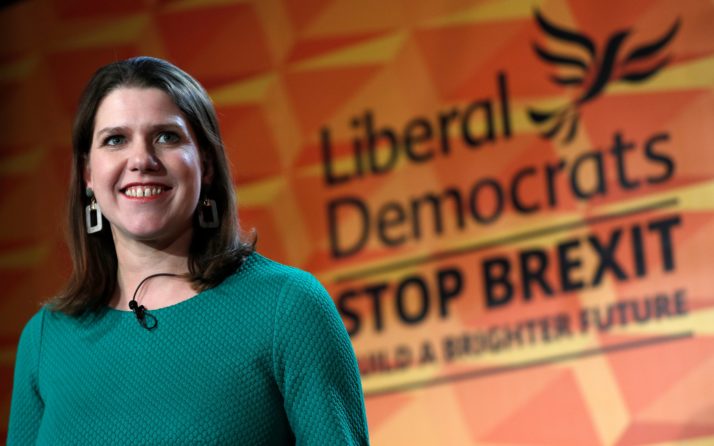 Jo Swinson: ‘Only Lib Dems can prevent a Tory majority’

By Eleni Courea and Emilio Casalicchio

LONDON — Only the Liberal Democrats can stop Brexit by preventing Boris Johnson from remaining as prime minister, according to Jo Swinson.

The party’s leader said the Liberal Democrats are “the only party that can win a significant number of seats from the Conservatives and deprive them of a majority.”

Speaking at the launch of her party’s election manifesto in London, Swinson presented herself as an alternative to the two “tired old parties” — Johnson’s Conservatives and Jeremy Corbyn’s Labour.

Swinson said Corbyn and Johnson were “two men who only know how to rehash ideas from the past, whether that’s the 1970s or the 1870s,” and that “whether Brexit is done by Boris Johnson or ‘sorted’ by Jeremy Corbyn, they are both gambling with your future.”

The central policy of the Liberal Democrats’ manifesto is stopping Brexit — the party said it would revoke Article 50 if it won a parliamentary majority and push for a second referendum if it didn’t.