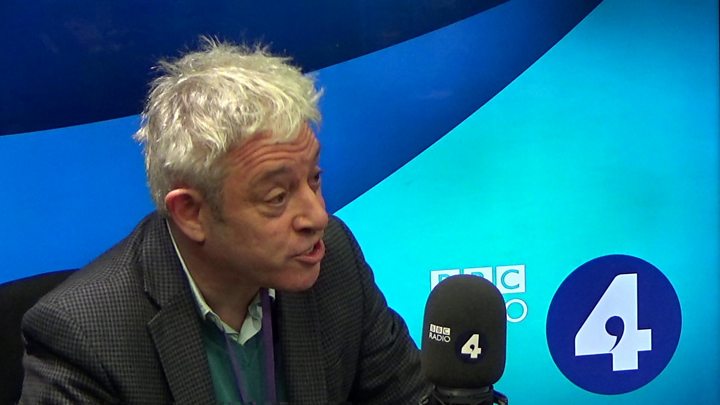 Media captionJohn Bercow: “So obvious that only an extraordinarily clever and sophisticated person could fail to grasp it.”

Former Commons Speaker John Bercow has said there is a “conspiracy” to keep him out of the House of Lords.

He named no names, but said it was “blindingly obvious” that there was a “concerted campaign” to prevent him from being given a peerage.

Previous Speakers have been ennobled when they retire, entitling them to sit in the House of Lords.

The ex-Conservative MP has been accused of bullying by former Commons colleagues, but denies the clams.

Cabinet minister Robert Jenrick said the claims must be looked into, but there was “no obligation” on the Prime Minister to give Mr Bercow a peerage.

The controversial speaker stood down in October after a decade in the job, during which he faced accusations of bias over Brexit as well as questions over his own behaviour towards colleagues.

Downing Street has refused to put forward Mr Bercow’s name for consideration by the House of Lords Appointments Commission. Instead, the Labour opposition has nominated him.

In an interview with the BBC’s Broadcasting House programme, Mr Bercow said while “every Speaker for the last couple of hundred years” had received a peerage, he accepted there was no automatic entitlement to one.

Mr Bercow is facing at least one formal complaint regarding his behaviour during his decade in the Speaker’s Chair.

He has dismissed claims there was a pattern of bullying towards his subordinates, arguing that the “vast majority” of his relationships with colleagues both inside and outside Parliament were constructive.

He told Broadcasting House that while he had had two disagreements with David Leakey, the former army officer who served as Black Rod the Commons, “neither remotely amounted to bullying” and there was no “regular rancour” between the two.

Bercow’s run-ins with his party