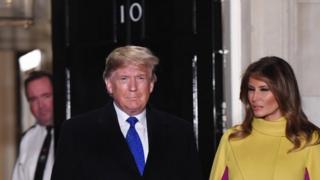 Prime Minister Boris Johnson has held a meeting with Donald Trump in Downing Street to discuss Nato defence spending and the situation in Syria.

Formal bi-lateral talks between the two leaders had not been officially scheduled.

But No 10 said they had an off-camera, one-to-one meeting in No 10, where a reception for world leaders was talking place.

The US president is in the UK for a Nato summit in Watford on Wednesday.

Mr Trump also attended a reception hosted by the Queen at Buckingham Palace, ahead of the Downing Street gathering.

Labour leader Jeremy Corbyn – who published a letter to Mr Trump on Monday night asking for “reassurances” that the NHS would be “off the table” in post-Brexit trade talks – was also at the Buckingham Palace event.

Mr Corbyn earlier said he was hoping to ask the US president for specific assurances that any trade relationship with the US “will absolutely not involve access to our public services and crucially of course our national health service”.

The BBC understands Mr Corbyn did not have an opportunity to speak to Mr Trump at the reception.

Speaking earlier at a press conference, Mr Trump said he wanted “absolutely nothing to do with” the NHS, adding he would not touch it even if it was handed to his administration “on a silver platter”, adding: “Never even thought about it, honestly”.

Asked whether he could work with Mr Corbyn as prime minister, he said he could “work with anybody”, although earlier he said he thought Mr Johnson would do a “good job”. 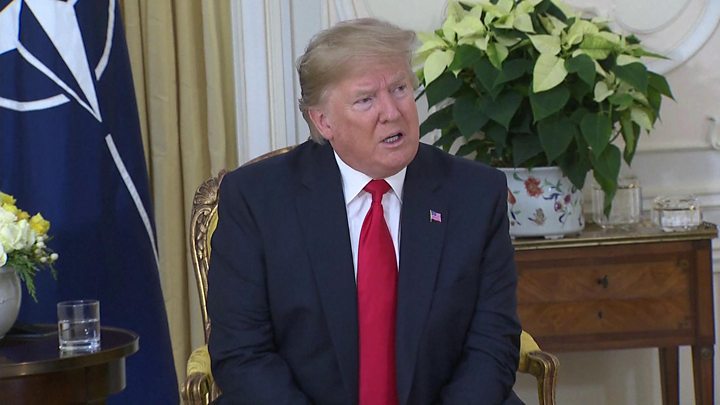 He has faced questions over whether he was avoiding a one-to-one meeting with Mr Trump, over concerns it could blow his election campaign off course.

But Downing Street said the two men had a low-key, off camera meeting in No 10 during Tuesday night’s reception.

In a statement, Downing Street said: “The leaders welcomed the recent increases in defence spending by Nato member states and agreed on the need for the alliance to be unified in the face of new and evolving threats.

“The prime minister also updated the president on this afternoon’s meeting between France, Germany, Turkey and the UK to discuss the situation in Syria.”

Leaders from the 29 Nato member states will start talks on Wednesday at The Grove,