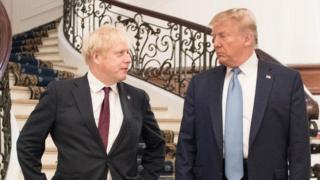 The UK will “overhaul its approach to foreign policy” as part of a government review, the PM has announced.

Army procurement, the diplomatic service and tackling organised crime will be among the topics covered.

The report is also tasked with seeking “innovative ways” to promote UK interests while committing to defence and overseas aid spending targets.

The 2019 Conservative manifesto promised that the UK would continue to spend 0.7% of gross national income on international aid. The party also said it would exceed the Nato target of spending 2% of gross domestic product on defence.

The new government faces a number of foreign policy challenges including securing a post-Brexit trade deal with the EU.

French Foreign Minister Jean-Yves Le Drian recently predicted the two sides would “rip each other apart” during negotiations which are due to begin on Monday.

The UK is also hoping to secure a trade deal with the US but relations have been strained by the prime minister’s decision to use Huawei to build the 5G network in the face of US opposition.

The government is also keen to strengthen ties with China, but some of the prime minister’s own MPs – including Foreign Affairs Committee Chair Tom Tugendhat – have cautioned against allowing Chinese companies’ heavy involvement in projects such as the 5G network and HS2.

Setting out details of the Integrated Review – first announced in December’s Queen’s Speech – No 10 said Brexit presents “new opportunities to define and strengthen Britain’s place in the world”.

Its remit, as set out by the government, is to: